Driven by the millennial mindset, attendee expectations are dramatically shifting the scope and strategy behind meetings and events. Today’s attendees demand personalized experiences that go beyond just sitting in a lecture hall. They’re looking for meetings with meaning, innovation, and insight. But most of all, they’re looking for event concepts and formats that foster authentic engagement ” engagement with the content, the city, and, just as importantly, each other.

In fact, a recent survey shows 80% of planners report that their jobs require more experience creation than they did just two to five years ago. That same study by the IACC also shows the four elements that are most important to attendees, and, as a result, driving those experiences.

In this post, we’ll focus on event ideas for numbers two and three, laying out some experiential formats that planners can use in event design to stimulate attendees and spur greater audience engagement.

Use these four event ideas to get attendees involved and engaged.

Most everyone is familiar with breakout sessions during meetings, and likely just as familiar with the awkward feeling of shuffling around trying to find someone to pair up with. By the time the ice breaks, it’s usually too late to create any meaningful engagement, and that chunk of time goes by the wayside.

However, giving participants an activity can go a long way in breaking that ice and loosening everyone up. A big key is to get people moving in ways that don’t feel awkward or offputting, but also encourage conversation and interaction between peers.

Before the 2016 MPI European Meetings and Events Conference, many attendees from previous years had viewed the conference formats as being very traditional. That all changed in 2016, when the Danish chapter of MPI cooked up some exhilarating new ideas aimed at getting attendees more involved. One of those ideas was a snowball fight.

400 international delegated participated by writing industry-relevant questions on pieces of paper that were provided to them. Surely many thought what was to follow was the age-old step of pairing off into discussion partners ” until they were asked to scrunch up their papers and throw them at one another. After the snowball fight, certain snowballs were randomly picked up and the topics on them were discussed in smaller groups. By the time attendees split into smaller groups, they were in high spirits, engaged, and more open to conversation.

How do you incentivize attendees to engage with content in meaningful ways? You turn it into a game, naturally. Gamification is the process of creating game-like systems around content, whether that be by creating teams, rewarding points for tasks, or tracking completion. And while some may have doubts about just how effective such a simple idea could be, it works just as well for adult learners as it does in grade school. In fact, a whopping 80% of learners say that they would be more productive if their work was more game-like.

Have you ever secretly wished you could be Harry Potter for a day? (Minus the dementors and Voldemort and all the near-death experiences, of course.) YourMembership, the world’s largest provider of membership-management software, brought that wish to life at Xperience17 when they  created a Harry-Potter-themed world with elements of gamification. This was executed through an event-specific app that an incredible 88% of attendees were excited enough to download.

Those at the event were whisked away to a magical world, where they were sorted into four houses named after the company’s industry pillars. Houses competed against each other, with points being rewarded for actions such as sharing photos, checking into sessions, scanning QR codes, and more. Attendees were even sent a Hogwarts acceptance letter letting them know which house they had been sorted into by the Sorting Hat. Upon entering the conference space, they even received a push notification letting them know that they’d arrived at Platform 9 ¾.

Remember that age-old adage about public speaking being the number one fear of human beings? Well, the larger the group, the more daunting it can be to participate in a discussion. But when people break into smaller groups, the stakes are seemingly lowered. By creating breakout sessions in smaller groups, events can encourage more audience participation, give everyone a chance to speak their piece, and make sure that each attendee is heard.

At IMEX, arguably the pinnacle of industry experiences for the world of events, organizers set up what they call Hot Topic Tables ” essentially small, moderated panels. Each is tailored around a specific subject, giving attendees the opportunity to break out and discuss the topics that are most important to them with a handful of peers who share the same interests. The idea seems simple, but keeps attendees from becoming disengaged by spending a whole day in a large group listening to speaker after speaker.

4. Hold a silent conference to make it easy to engage with multiple sessions.

The idea of the silent disco has been around for years at music festivals and late-night shows. Multiple artists take the stage, and concert goers wear headphones, tuning them to the frequency for the artist they want to listen to. Take the headphones off, and it’s completely silent, except for the muffled sounds of dancing and shuffling. It’s an unusual and surprisingly delightful experience. It’s also one that can add significant value at conferences and similar events.

Think about it: Getting from one speaker to the next isn’t always easy, especially when the spaces are far away, or there’s overlap in time slots. When silent disco technology is applied to conferences ” aka a silent conference ” it eliminates all of this hassle. Multiple speaking sessions can occur simultaneously in the same place, while attendees can toggle between them and easily engage in conversations with peers who are also tuning in.

For the 2017 Adobe Summit, organizers tasked the company Silent Conference with creating a system that would allow them to have five speakers in one space. Silent Conference rose to the task by providing 2,500 custom-branded wireless headphones that allowed each attendee to listen to the speaker they were most interested in at any given moment. The result? 100,000 hours of unique audio engagement, plus 42 presentations squeezed into a period of just two days.

Map it all out with event technology.

While these event concepts are more engaging, they’re also more complex than the traditional, outdated formats that result in herding attendees into a ballroom. For planners, that means more moving parts and more work. Luckily, event technology can help increase productivity by 27% and decrease costs by 20% ” setting planners up for success despite the larger burden.

For events with formats like these, diagramming software can be especially crucial. Laying out the space visually beforehand not only helps vendors and event teams, it also makes it easier to collaborate with a given venue and work through the layout possibilities down to the square foot ” whether setting up multiple concepts in a single space or multiple spaces with a single concept.

As more and more meetings and conferences try to reinvent themselves by creating purposeful experiences, event ideas like these will be the key to stimulating attendees and ensuring that the content is able to meet its objectives. Start with these four, and let your imagination run wild. The next great concept is lying right around the corner, just waiting for a savvy event professional to bring it to life. 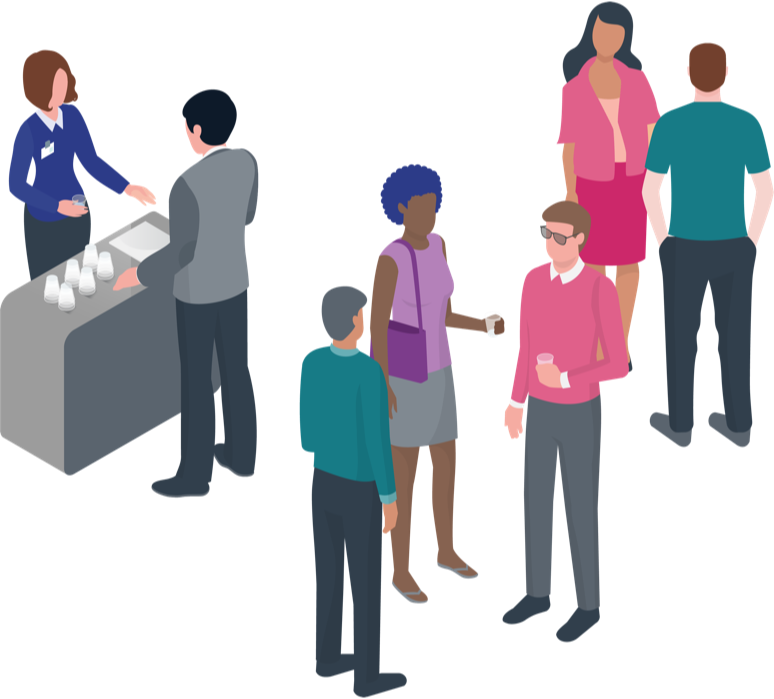